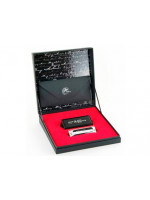 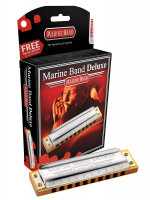 Key Option:Key of C, Color Option:Chrome Custom cover-plates bearing Dylans signature Carrying case embossed with Dylans Eye logo outer gift box featuring an exclusive picture of Dylan in the inside cover. Diatonic Signature Artist Series; Bob Dylan
From the Manufacturer
Manufacturer's Description (April 1, 2009)
What happens when you join a 151-year-old musical instrument manufacturer with one of the world's most legendary musicians who happens to be the single most influential harmonica player in the annals of popular music? You make history, of course! Appropriately named the Bob Dylan Signature Series Harmonica, this harp is available individually in the key of C, as well as in a set of seven natural keys of A, B, C, D, E, F, and G.

An Exclusive Interview with Bob Dylan
Bob Dylan talks to Scott Emmerman, Director Of Marketing and Sales for Hohner USA

When did you get started playing harp?
"When I was in high school"

Which came first for you, the guitar or the harp?
"The guitar"

Having played both wood & plastic comb harmonicas, which do you prefer & why?
"I like the more natural feel of the wood"

Who are some of your main musical influences on harmonica?
"Wayne Raney, Little Walter, & Jimmy Reed"

What are some of your personal favorite harmonica tunes performed by other artists?
"Roller Coaster" by Little Walter, "Going Down the Road" by Woody Guthrie, & "Freight Train Boogie" by the Delmore Bros. featuring Wayne Raney"

Tell us about your experiences with the harmonica "rack." When did you first start using one?
"When I was performing solo in coffee houses. I got the approach from Woody Guthrie... it really gave a coffee house performer more variety to be able to keep the rhythm on guitar while playing the harp."

How did you adapt your playing style when using it?
"Well, you play a more chordal thing, as opposed to the single note style of folks like Little Walter."

Does the harmonica play a role in your songwriting process?
"No"

How do you feel your harmonica playing has influenced today's players?
"I'm not sure it has"

Are there any young harmonica players today that capture your attention?
"Not really. But I hope one comes along soon."

What advice would you give to a beginning harp player?
"Listen to Little Walter, Wayne Raney and Jimmy Reed!"

The Dylan Legacy
Bob Dylan, the venerated American singer-songwriter, author, poet and disc jockey, has been a major figure in popular music for five decades. During his career, Bob Dylan has won awards for his songwriting, performing, and recording, earning him eleven Grammys (and a Lifetime Achievement Award), Kennedy Center Honors and an Academy Award. He has been inducted into the Rock and Roll Hall of Fame, Nashville Songwriters Hall of Fame and the Songwriters Hall of Fame. In 2008, Bob Dylan was awarded a Pulitzer Prize Special Citation for his "profound impact on popular music and American culture, marked by lyrical compositions of extraordinary poetic power."

Hohner Harmonicas--The Proven Choice
Hohner--the world's biggest manufacturer of harmonicas--has proudly maintained a tradition of high quality instrument making. Their mission is to offer a diverse range of models designed to meet the needs of every musician in today's musical climate.

This harp features custom cover-plates bearing Dylan's signature, a carrying case embossed with Dylan's "Eye" logo, and an outer gift box featuring an exclusive picture of Dylan in the inside cover.

Tireless investment in research and development, combined with knowledge that has been cultivated for decades, ensures the company's high quality standards. By working in close cooperation with the most renowned professional harmonica players, Hohner ensures that their instruments remain on the cutting edge of the industry. An up-to-date manufacturing process uses special alloys and precise stamping and milling tools to produce reeds of optimal sound quality, responsiveness and longevity.

Hohner's long standing dedication to harmonica excellence has inspired a loyal following among players from all walks of life; young and old, amateur and professional.

The Bob Dylan Signature Series
Hohner's collaboration with Bob Dylan naturally leads to the development of a next-generation harmonica. "This new harmonica has an enhanced sonic versatility and produces both uncharacteristically warm tones while also achieving a brilliance or 'brightness' that allows musicians to more freely express themselves," stated Scott Emmerman, Director of Marketing and Sales for Hohner, Inc., "It was not easy to achieve the standard that Bob Dylan represents. Among other things, we gold-plated the reed plate in order to achieve the specific sonic requirements."

The new harmonica is appropriately named the Bob Dylan Signature Series. It features custom cover-plates bearing Dylan's signature, a carrying case embossed with Dylan's "Eye" logo, and an outer gift box featuring an exclusive picture of Dylan in the inside cover.